“Being in a funeral definitely was something that we never thought we would experience during a vacation, but the cremation in the Varanasi Ghat is a completely different ceremony than most of us are used to. We didn’t see anyone crying or sad faces which was such a relief for us. People are not allowed to be sad. Some are even happy that the soul found salvation which we found as a very interesting way to deal with death.”

Rising from the Himalayas, the Ganga is considered the holiest of rivers by Hindus. According to mythology Varanasi liberates soul from human body to the ultimate, it’s believed that the ritual of having the body cremated at the Ghats (the crematory temples by the river) and having the ashes thrown to the river will provide salvation for the human soul. These Ghats have been there for thousands of years and we had the chance to walk in the  temple during the cremation ceremony. It was an intense experience. Our tour guy Vicha took us there and explained us briefly how it would work.

Pictures are not allowed in the cremation area in respect to the families. First he introduced us to the priest which is the one that runs the crematory and a shelter that is located right next to the crematory and rescue elderly homeless people that are wandering around the streets of Varanasi. They take them to this place where they wait until they die. He said in most of the cases the elderly people are not sick, most of them are just very old and don’t have a place to go before they die.

He asked us to follow him into the area where the bodies were being cremated. I put my camera back in my bag and followed him as he showed us these piles of wood that are a specific kind of wood used to burn the bodies.  As we walked we didn’t see anyone crying or sad faces which was such a relief for us. The last thing we wanted in a vacation is to be in a funeral, right? The ceremony doesn’t look anything like a funeral, people are just chatting, some are in silence, but nobody is allowed to be sad. They actually are happy for the soul to find salvation which we thought was a very interesting way to deal with death.  The priest then explained us that sad energy would affect negatively the spirits of the ones that died.

We walked in and then we saw the bodies wrapped in this gold colored fabric blankets. Every day no less than 150 bodies are cremated in that site. It was pretty intense, we are not gonna lie. But less overwhelming than we thought it could be. We crossed this area in between the cremations and the priest took us to the very end of the structure by the river where he said we could take pictures of the landscape. By that point we were done with the experience, I took a picture just to be polite, donated a few thousand rupee that goes for the shelter and we managed to get out of there. I don’t think we will ever do that again, this is the kind of experience you have once in a lifetime, I’m glad we got to learn so much about their culture, it gave us a much deeper understanding of the indian people and their beliefs which was key to absorb the culture. Also our tour guide was amazing, he made us feel very safe and we definitely wouldn’t make it without him.

ghats to visit in varanasivaranasi ghats
15 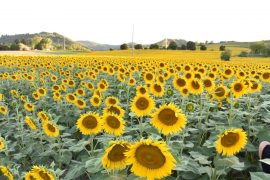 LIVING NEXT TO A SUNFLOWER FIELD – ITALY