Seeking for advice or simply hanging out with a local is the smartest way to explore a city. With this in mind we interviewed Manuel Rodrigues to go straight to the point and give us smart travel advice from a gay local perspective. Manu is a Brand Representative living in Seville.  He is a world traveler, passionate about music and yoga.

The gay scene in Seville is shy if compared to bigger cities such as Barcelona or Madrid, but still the city has many options to offer. Here is what Manu has to say about his city.

Alameda de Hércules is the center of the Seville gay scene. Undoubtedly, the best area for a gay guy in my city is the “La Alameda” area. In this area you will find many gay bars and pubs, as well as the occasional disco. They have even opened a gay friendly Hotel on Calle Calatrava called Hotel Ritual.

Seville has a gay atmosphere, but it has nothing to do with the big cities like Madrid or Barcelona. Everything is concentrated around the same neighborhood. La Alameda is the place to be if you are in the mood to party. Baron Rampante and Men To Men are the main gay bars in town where the locals go. Holliday by Obbio is a gay friendly disco club with animated parties on Saturdays. Another option is Itaca, one of the oldest gay clubs in town.

THINGS TO DO seville

Strolling through Seville is an experience. Visit the streets of the Santa Cruz neighborhood, the surroundings of the Cathedral of Sevilla and its giralda – the bell tower of Sevilla. The bull ring at Plaza de Los Toros is a must see place. Spend some time exploring the underground  farmers market La Encarnación. There are a few restaurant options inside the market situated under the Mushroom. Go see the Triana Bridge, the Plaza de España and the Maria Luisa park.

The best time of the year to visit Seville is during Spring. The month of April is when Seville celebrates it’s Holy Week. Also the city celebrates it’s well-known April Fair or Feira de Abril, is an annual food festival where people put on their best clothes and go to Parque de Los Principes.  Every year, two weeks after Semana Santa the April Fair comes to Seville.

Go for tapas! This is the best option of food in Seville. There are many options of different restaurants that you can find in La Alameda area. Also you should try Salmorejo, a purée consisting of tomato and bread. In this same neighborhood, you can find meals from all over the world.

Typical of my city is buying a hand-painted fan. You can find it at Calle Sierpes, one of  the main shopping streets in town whit a large variety of shops. Another thing you should look for to buy in Seville are the handcrafted ceramics at Calle San Jorge.  In Seville you can also find olive oil with exceptional quality.
The time lapse of the streets of Seville give you an idea of what to expect. The city is very charming.

Do you like this article?  Leave us a comment below.
gay sevillagay sevillegay travel sevilleseville gay guidethings to do seville
14 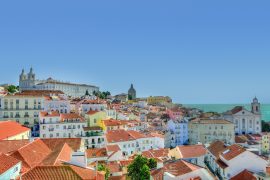 WHERE THE LOCALS GO – GAY LISBON